I found this article to be a great read regarding John Wooden. He recently died at the age of 99. He is considered the greatest college basketball coach ever and was vocal about his faith in Christ, using that whenever he could but in a gentle and loving manner.

The article below is from ESPN.com.

I thought it was a good and easy read. 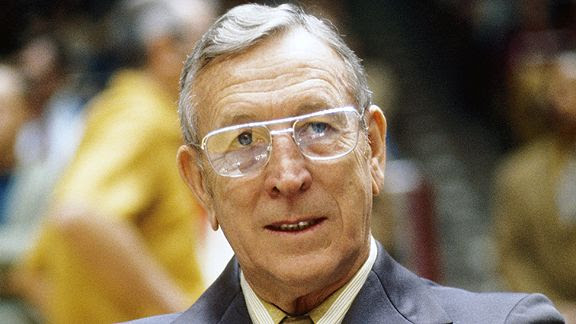 The awful thing about knowing John Wooden was that when you left him, you realized how weak you were as a man.

Every time I left his little 700-square-foot condo in Encino, Calif., full of books and learning and morals, it would hit me how far short of him I fell.

He made me want to be more principled. This is a man who once turned down the Purdue head-coaching job because he felt the university was treating the fired coach "terribly. I wouldn't stand for it."

He once turned down the Minnesota job he and his wife, Nell, wanted -- and accepted the UCLA one instead -- because Minnesota hadn't called with its offer by the 6 p.m. deadline he'd set. Turns out a storm had knocked down the phone lines. Didn't matter. He went to UCLA and won the Bruins 10 NCAA titles. No other coach has won more than four.

He abhorred stardom and showmanship. He was against jerseys being retired at UCLA, even the one worn by Lewis Alcindor (later: Kareem Abdul-Jabbar.) "What about the youngster who wore that number before Lewis? Didn't he contribute to the team?" 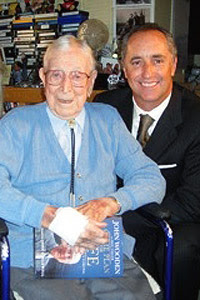 One time I asked him, "How many championships do you think Kobe can win?"

He made me want to be more humble. In the most self-obsessed city in the world -- Hollywood -- he was selfless. It only made him stand out even more, like a priest at a Chippendale's convention. He would hardly even get out of his chair during games. He and his blue eyes and his farm-boy haircut would just sit there and watch his toy spin. I asked him once what he thought about coaches in their Armani suits strutting up and down the entire game, coaching every dribble. "I don't understand it," he said. "What do they do in practice?"

He made me want to be more courageous. For instance, I'm terrified of dying. He used to laugh about it.

One of his favorite stories was about the time he took his great-granddaughter to get her ears pierced. She was 11. They drove home from the mall in his old 1989 Taurus -- "greatest car I ever had," he always said -- and she was practically unraveling with joy.

"Oh, Papa," she said. "I hope you live five more years so you can take me to get my license!"

He made me wish I read more, thought more, listened more.

I started noticing something on my visits. The TV was never on. He was always reading. Poetry, history, the Bible. Never sports. Never novels. He knew hundreds of classic poems by heart. Yet when he found himself coaching a bookish 7-footer named Alcindor in 1966, he memorized the poems of Langston Hughes, the black modern poet. It didn't go unnoticed.

Wooden made me wish I read more, thought more, listened more. I started noticing something on my visits. The TV was never on. He was always reading. Poetry, history, the Bible.

He was a nut for Lincoln, yet not for a second did he realize he, himself, was sports' Lincoln, a boy who'd learned to read by the light of a coal lamp, a man of simple wisdom whose pithy nuggets of good advice -- "Do not let what you cannot do interfere with what you can" -- will be quoted for the next 100 years.

Me? Great books stack up at my bedside while I watch "The Bachelorette."

Look, John Wooden wasn't perfect. He may have stopped swearing for good at 14, but he said plenty to refs. He'd put his head down and yell things at them into his program as they'd run by. "Their big fella is fouling Nater every time down! Why can't you see that?"

And it's not true he never drank. He did, at 22, with his Purdue teammates. He had a half a bottle of beer "and threw up six," he remembered. That was the last time.

He made plenty of mistakes. He let Alcindor score 60 points in his first collegiate game just to put fear in the rest of the Pac-10. "I'm ashamed of that," he once said.

He and Nell's relationship wasn't perfect. Once, when he was just out of college, they had a huge fight and he left. Started hitchhiking west. Didn't care where he went. Got as far as Lawrence, Kansas, where he got a job helping to build the football stadium. Then he went back home. "I just got a little confused," he said.

At UCLA, he didn't pay enough attention to realize a booster named Sam Gilbert was lavishing his players with gifts and cars. But I will punch any man in the mouth who says Wooden knew. He couldn't have known it or he'd have stopped it. He'd have sooner cut off his own hand than cheat.

He made me want to love more deeply.

He took me into his bedroom once, in 2000. The clocks were all wrong. He stopped them at the time of Nellie's death, 15 years before. Only one side of the bed was slept in, and above the sheet, not under them, and hadn't been since the day she died. On her pillow were hundreds of little letters in envelopes tied up in bundles by yellow ribbons. He wrote her every month telling her how much he loved her and what all the kids were doing. Did it right up until the last few months of his life, when his eyes stopped working.

"Coach, were you never tempted in all those years to go on a date?" I asked him once. "Didn't other women come flirting around after you?"

Once, when he was missing Nell terribly, one of his great-granddaughters -- she was 5 at the time -- saw how sad he was, tugged on his pants leg and said, "Papa, I know you miss Mama. So I'm going to rent you an airplane so you can fly up in the clouds and see her."

Here's to Coach for finally getting back with his girl -- no airplane necessary.

And here's to all of us striving to be half the person he was.

I am not a big sci-fi reader, however, The Last Christian was a book I had a difficult time putting down. Without giving the entire story away, just picture it is the year 2088, that’s right we’re working into the future. Christian America has ceased to exist, people are living life with amazing scientific discoveries, culminating in the ability to have neural implants put in their brains, and brain transplants, which enables them to live in a Virtual Reality (VR). The transplants can also lead to living forever and losing an opportunity for a relationship with God.

Because of these implants people can process information at lightening speed, they can read books in minutes and are able to communicate through a grid system. With all this going on in the world, Abby Caldwell revels in her work in Papua, New Guinea as a missionary. However, the people in her village which is a protected environment die of a mysterious illness, which she and a doctor friend cannot figure out.

Abby ultimately comes to the United States, stays with her sister, who has high political aspirations and doesn’t want her sister near her. The plot thickens with many twists and turns. It’s a fun book, but one that really points out some of the potential hazards of technology.

Abby comes across with a wonderful innocence which never gets lost, even though she is lost in becoming part of American society. She continually talks to people about God, with a powerful grace and childlike faith which is missing today.

This is not an easy to read, relaxing book. But . . . it was hard to put down at the same time.

You can purchase this book at www.christianbook.com

This book was provided for review by the WaterBrook Multnomah Publishing Group.
at June 01, 2010 No comments: