This is Your Brain on Sports! 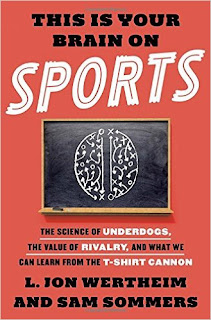 When I saw this title, This Is Your Brain on Sports: The Science of Underdogs, the Value of Rivalry, and What We Can Learn from the T-Shirt Cannon, by L. Jon Wertheim and Sam Sommers, I knew I had to read this book.  I was not disappointed.  The entire book is fun to read.  It’s interesting to see some of the “science” behind sports.  The authors wrote, “As outlandish as sports conduct may seem, it is rooted in basic human psychology, neuroscience and cognitive tendency.”

There are chapter titles that will pull you in.  Titles like “WhyGiving Every Little Kid a Trophy is Such a Lousy Idea” to “Why Rooting for the Mets Is Like Building That IKEA Desk.”  They go on with “Why Our Moral Compass Is More Flexible Than an Olympic Gymnasts,” and “Tribal Warfare: Why the Agony of the Other Team’s Defeat Feels Just as Good as the Thrill of our Team’s Victory” are very enticing.

They explain why a tennis player like Andy Roddick would fire a tennis hall of famer like Jimmy Conners and replace him with a tennis coach who had a losing record.

There are many anecdotal stories, talking about most sports to the psychology of rooting for the underdog, to violence, to the Mets, to trophies for kids.

Whether or not you are into sports, this is a book you will like.  Some explanations could have become tedious, but I thought they were well explained and made sense to me.

I received this book from Blogging for Books in exchange for an honest review.

Pastor Michael
I love to hang out with my boys and play sports, wrestle and play PS2 with them, and to have them hug me and say "I love you." I love to hang out with my wife, she is absolutely beautiful, (inside and out), the nicest and kindest person I know. Actually that's not about me, that's what helps me to live my life. Finally, without Jesus I'd be lost, there are too many scriptures to quote. But for me it is life transformation (2 Cor. 5:17) and living the super abundant life Jesus gives us (John 10:10b). Be a Jesus Freak!