Practical Reminders for Parents of Teens 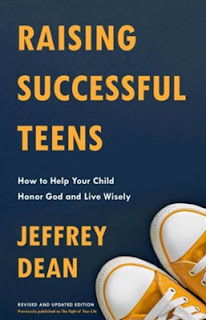 This is really a pretty easy review.  I quickly read through the first 5 chapters of RAISING SUCCESSFUL TEENS in one sitting.  This is a very practical book!  It is straight forward, without fancy and crazy illustrations.  Jeffrey Dean has written an important book which Christian parents need to read.  He doesn't pull any punches.  He explains the role of the mother, as well as the role of the father.  He talks about the importance of the family unit.  He does speak to single parent families.  He is relevant on his topics, including chapters on media, cell phones, dating and sex.  He has an addendum in the back of the book which should have been moved closer to the front about boys respecting girls/women.  That's an important and relevant topic, not to be tucked away in the back of the book (not that Jeffrey was trying to hide it, but it could have been included in other sections)

Overall, this is an excellent book, which I highly recommend.
I received this book from Multnomah Press in exchange for an honest review.
at August 21, 2019