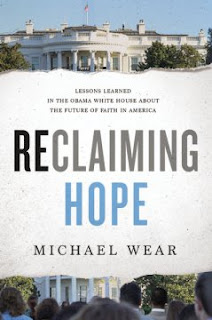 I have been skeptical for awhile about faith issues in the White House and thought this would be an excellent book to help me.  In his book, Reclaiming Hope: Lessons Learned in the Obama White House about the Future of Faith in America, Michael Wear has written an excellent book which is very helpful to all people who want to better understand the Obama Administration as it pertains to religion.

Wear has written what I believe to be an unbiased, objective book, for someone who was close to the Obama administration.  He includes stories, humor, and anecdotes.  This book is part memoir / biography and it is also a call to action for Christians.  Wear served President Obama in faith based outreach in the White House and in his Presidential campaign.  Wear describes himself as a Conservative Christian Democrat.  Something I don't think we hear of very often.

Wear sees the convergence of politics and religion and embraces it.  He actually is optimistic about the future.  He is not a black and white thinker, instead he calls for the people, especially Christians to embrace and both / and partnership between the church and government.  It is a different way to look at the church and politics, but one which has merit.

This was a well written book and helpful to read as well.

I received this book from booklook bloggers in exchange for an honest review. 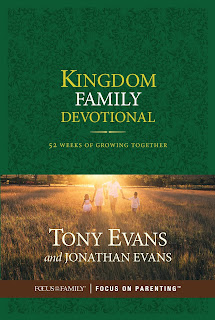 The Kingdom Family Devotional: 52 Weeks of Growing Together is a wonderful devotional which is designed for families.  Tony and Jonathon Evans have written a devotional which covers 5 days per week, for 52 weeks.  They cover a multitude of themes and topics.  As the topic is discussed over a 5 day period.  I like the fact that there is prep work the parent / guardian needs to do.  There are some things to do in the family which help unite the family, including fun Fridays.

The hope / purpose of the book is to help families be and stay together through the use of this devotional.  This doesn't solve family problems, but helps bring families together for a time of prayer, Bible reading, reflection and hopefully fun.

The book is well presented for a devotional, with a nice hard cover.  This would make a nice gift to a family.

I received this book from www.tyndale.com in exchange for an honest review.
at January 14, 2017 No comments: Links to this post 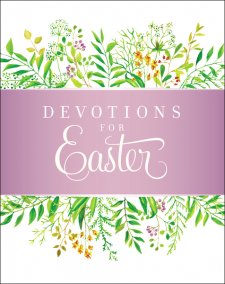 Devotions for Easter is a wonderful devotional book designed for women for the Lenten season.  The book is comprised of 40 short devotionals with great pictures (photographs) throughout the book.

The goal of the book is to help prepare the heart and mind of the reader to celebrate the risen Savior.  The reader is encouraged to take the time to stop and discover the ways Jesus is showing His love for you.  In remembering His Easter story—the greatest story ever told—your own will become that much sweeter.

In forty days of warm, inviting readings, prayers, scriptures, and beautiful images the reader will draw closer to God, through Christ’s journey toward the cross and the miracle of His resurrection.

This was a very nice devotional, easy to read, but insightful!  I recommend this devotional.

I received this book from booklookbloggers.com in exchange for an honest review. 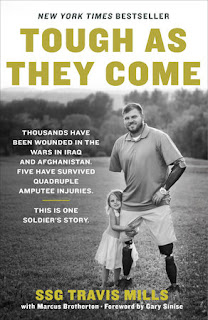 Sometimes war books are difficult for me to get into, but TOUGH AS THEY COME was not one of these books.  This was a hard to put down book.  It chronicles the life of Travis Mills.  Travis is only 1 of 5 wounded veterans who is a surviving quadruple amputee among all of the veterans of the wars in Afghanistan and Iraq.  He was injured in an IED explosion.  His unit was assigned the task of clearing a field and his unit missed one.

Mills has endured many surgeries and remains active and passionate about life.  He is a motivational speaker who drives own car, participates in sports such as running, cycling and skiing; he is also an active promoter of programs to rehabilitate others.  He also started the Travis Mills Foundation which benefits and assists wounded and injured veterans.

The first 2/3 of the book chronicles his life before and during the war, while the final 1/3 of the book looks at his life since his injuries occurred.  Overall, this is a moving and powerful book about one man’s attitude in the face of some of the worst adversity one can imagine.

I would highly recommend this book.

I received this book from www.bloggingforbooks.com in exchange for an open and honest review.