Zachary has had a couple of attitude issues lately. We are not sure if it has been the pump doing a strange work on him or what it is. At times his blood sugar has jumped way high, and at other times for no reason, it drops. The other day, we forgot to give him insulin after his lunch, and his blood sugar was perfectly normal. As he grows, it becomes a constant issue to troubleshoot his insulin rates and change them. Debbie is best at calibrating his pump. She's great. Oh, by the way October 1, was our 13 year anniversary of our first date!

Okay, tonight the boys were getting ready for bed, and Zachary got his last drink, but was slow to come upstairs. We called for him to come up, and he said another minute. So I waited and then he came up. He told me he had something on the railing for me, but I could not look at it, then I forgot about it. The note below is what he wrote on his dry erase board. 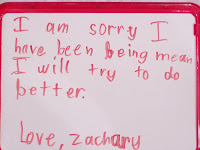 On the one hand I am proud of what he wrote and his recognition of how he has behaved, on the other hand, how long has he been internalizing what he has been doing and . . . Anyway, I just wanted to say I was proud of Zachary for what he did and wanted you to see it too.
A proud dad